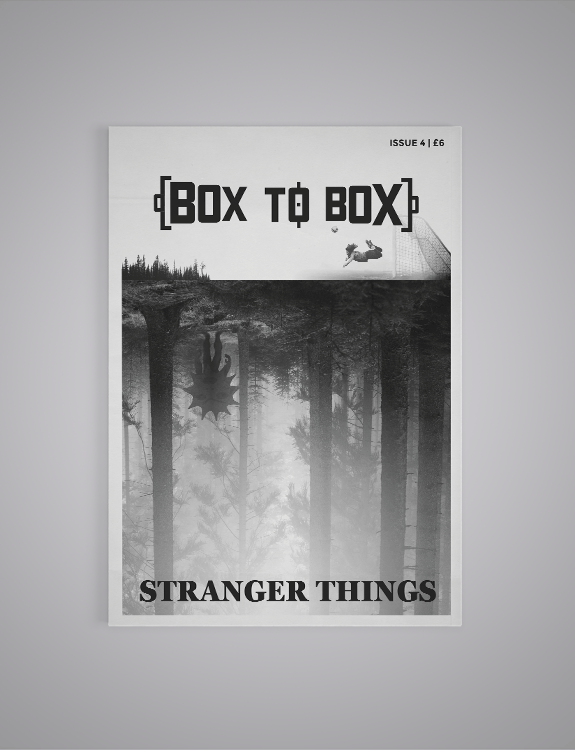 Football is often described as the beautiful game. But that doesn’t mean it can’t be ugly or downright absurd. Issue 4 of the quarterly Box to Box magazine brings you the stories behind the Stranger Things that lie beneath the surface of the world’s most popular sport.

The unlikely story of Leicester’s fairytale season from last year is well documented, and indeed strange, but even that cannot compare to some of the peculiar, surprising and disturbing stories which have taken place over the last fifty years. Some of which are so unusual and unfathomable that it is as if you are peering at the world upside down.

We take a look at the bizarre and downright funny, such as the story of how a World Cup winner ended up taking the pitch at Dundee FC. Another highlight comes from the story of Partick Thistle’s mascot, which is designed by artist David Shrigley, and resembles a 1980s TV monster rather than the loveable characters that populate the rest of the footballing landscape.

The magazine also covers some of the game’s more unsettling and serious events including how a number eleven helped bring an end to a civil war in Ivory Coast and the role three black West Bromwich Albion teammates played in helping combat racism in 1970s Britain.

With a talented team of writers and designers who have previously contributed to The Guardian, The Blizzard, These Football Times, The Football Pink and In Bed with Maradona, we take a look at these stories, making sure to pay tribute to the stories outside the sporting mainstream.

Order the magazine now to receive the issue through your letterbox when it is dispatched. Or, to get the Box To Box mag to your door every quarter, get a yearly subscription here.

0
Your bag is empty
Start shopping