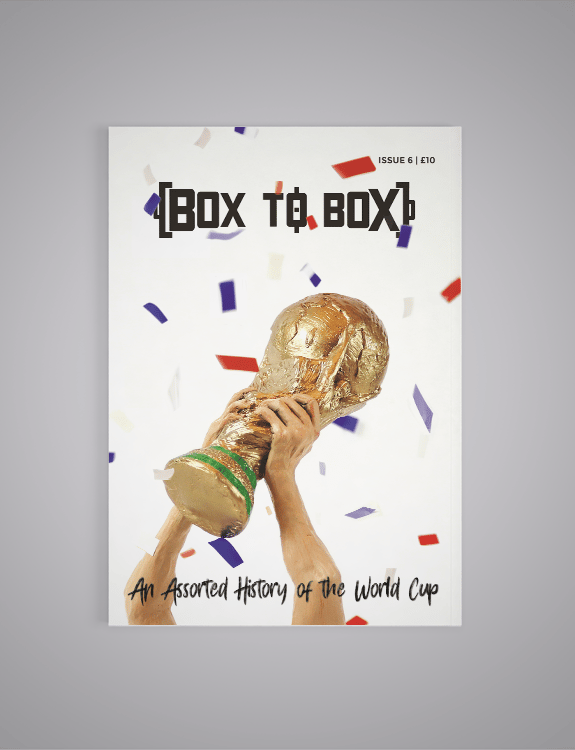 Issue 6: An Assorted History of the World Cup

In by far our biggest magazine yet, Issue 6 of Box To Box is an assorted selection of 31 original pieces looking at the stories behind the players, teams, events and editions of the world's biggest sporting event.

In a journey through the twenty previous editions, we take a look along an assorted history of the tournament from it's cradle in Uruguay to the future in 2026, exploring the stories behind the heroes, from Pele's breakthrough to Cruyff's turn, Socrates' headband, through to the modern-day heroes of Romario, Iniesta, Totti and Cahill.

The goalscoring achievements of Fontaine and Klose also get their just attention, along with cult players who didn't achieve the glory their talents deserved and tournaments ending in heartbreak with Gascoigne, Baggio and Batistuta.

In Maradona and Zidane, we have two players who had such an extensive influence on multiple tournaments that we decided to include two articles on both. Don't hold that against us.

But this isn't just about the stories behind the players, but how the tournament connects to me and you, the fans. We have personal recollections from emulating Tostao in '70, watching Michael Owen's infamous goal in '98, 'the big telly' at school during '02 and a Landon-Donovan-induced-heartbreak in Slovenia in 2010.

It's this connection with fans that transcends four summer weeks every four years and takes us to all corners of the globe from Portugal to Colombia, via Saudi Arabia, Scotland, Sweden, Israel and across Africa.

With a talented team of writers and illustrators who have previously contributed to The Guardian, The Blizzard, These Football Times, The Football Pink and In Bed with Maradona, we take a look at these stories, making sure to pay tribute to the stories outside the sporting mainstream.

Pre-order the magazine now to be one of the first to receive the issue through your letterbox when it is dispatched in June. Or, to get the Box To Box mag to your door every quarter, get a yearly subscription.

0
Your bag is empty
Start shopping